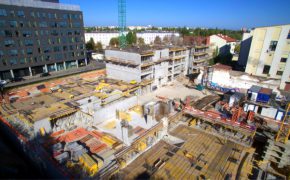 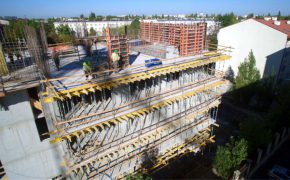 Newly constructed complex of buildings, with residential premises located at Matejki Street in Lodz, near the DK 14 and the University of Lodz, is slowly taking shape. Objects settlements are characterized by a diverse number of floors above ground ranging from 5 to 11 and two underground levels. General contractor entrusted the supply of Palisander formwork systems.
To perform arched walls at -2 level were used circular formwork Trapez, and the other walls of buildings were made by using systems Logo and Raster. With ceiling structures proved to be a universal slab formwork PAL-20. Due to the concrete courtyard of the underground levels, in addition to the level -1 and -2, were used MEP props to strengthen the shoring of ceilings and to allow heavy transport access near to floors above ground. Construction was also carefully equipped with safety systems that secure workers from falling from a height: including in climbing platforms KBK 180, a system of individual security Alsipercha or grids PAL-BHP.