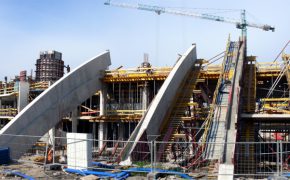 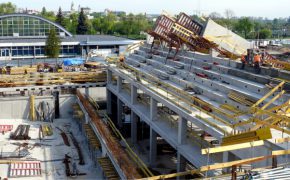 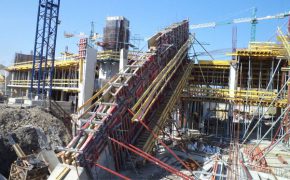 Formwork PAL-X3M in conjunction with the wall formwork systems was used, among others, to perform arched columns of the Olympic Swimming Pool in Lublin.
50-meter pool with the audience of 2,100 seats is one of the three parts of the constructed swimming pool. The next will contain a recreational pool with a “sphere” and slides, and in the third saunas, spa and rehabilitation area will be located.
PAL-X3M in connection with wall formwork Mammut were used to complete the 7-metre-high powerful columns in the shape of a sickle . And “egg-shaped” columns were made entirely with a plastic formwork. In addition to Mammut and PAL-X3M systems at the construction site were used Superslim system and timber-beam slab formwork PAL-20.